I love Thanksgiving. I love getting together with family and eating more mashed potatoes than I should. We have a tradition of going around the table after eating dinner and saying one thing that we have been thankful for in the past year. Some years it is so easy to talk about how the Lord has blessed us, but other years it is a little more difficult to be thankful. Yet, there has never been a time when someone was silent when the topic of giving thanks was discussed. Even in the challenging days there is always, always something to be thankful for.

Give thanks to the Lord, for He is good; His faithful love endures forever. Psalm 107:1

Even when it is difficult to see the Lord’s work in our lives, we can be confident of His presence. The Lord is teaching me a lot about perseverance in this season in my life. This holiday season take some time and look for the glimpses of God’s presence, even in the hustle and bustle. Know that the Lord has you in the exact place that you are needed and be thankful that He guides every step that you make.

Here at CentriKid we are so very thankful for the churches, leaders, and kids that we are able to serve year after year. We hope you have a wonderful Thanksgiving and that God blesses this sacred time of faith, family, and friends. If we were all at my family’s dinner table, what would you be thankful for this year?

“Captain’s Orders” is a game we have been playing at CentriKid this summer. Kids  have been loving this airplane-themed game that ties in with our 2016 theme: Unseen!

HOW TO PLAY
“Captain’s Orders” is similar to “Red Light, Green Light.” Ask players to line up shoulder to shoulder on the starting line. The goal of the game is to move down the field and reach the finish line. Players may only move by listening for commands and completing the corresponding actions. Use the following commands:

After each game at CentriKid Recreation, we take a couple minutes to debrief it and talk about how that game can actually relate to our relationships with God. This year, with Captain’s Orders, we are using John 8:31-32 and talking about how God’s Word is the ultimate Truth, and we can know it by reading the Bible and listening to the Holy Spirit every day.

This game is a great one to play with kids at church because you can give the kids a turn being “Captain,” and it requires very little equipment and minimal setup time. And the best part about it is that you can relate it back to God’s Truth, and how we can know Him more.

Here is a great game that is simple, tons of fun, and you can scale up or down depending on how many will be playing the game. If you came to camp in 2015, your kids played this game, so they might still remember it.

Equipment needed:
–Large area space (depending on number of kids, the area of half a basketball court can work…a larger space just works better, especially with larger groups).
–Lots and lots of frisbees.. the more the merrier
–Buckets or hula hoops
–Boundary markers

Setting up the playing field: 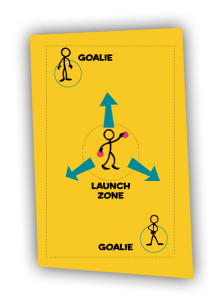 –The field should be a large, flat area. Ideally outside, but inside a gym is plenty of space and tons of fun too!
–You should mark off a launch zone in the center of the field (this is where a few volunteers will be launching frisbees the entire time).

–Depending on the number of teams, you’ll need that same number of buckets or collecting zones where each team will bring their frisbees back to.
–At the beginning of the game the frisbees start in the center launch zone.

Game play and rules:
Once the game begins, the volunteers in the center circle will start throwing out the frisbees every which way, and this should continue happening essentially the whole time. The goal of the game is to get the frisbees into your team’s bucket/collecting zone. The winner in the end is the team who gets the most frisbees to its bucket.

Once a player has a frisbee in hand he cannot move his feet. Instead he must throw the frisbee to someone else on his team. A member of another team cannot steal a frisbee from the hands of another player, but can intercept or knock down a pass in the air.

Helpful tips:
–Have a goalie who catches all the frisbees to put them in the bucket.
–Make a rule that players cannot steal from the buckets.
–Assign runners (either volunteers or players) whose job it is to bring frisbees from the buckets to the center circle..bringing them back in groups of ten helps keep track of points.

We all love this game, and we hope this game helps you in your ministry. Have fun! 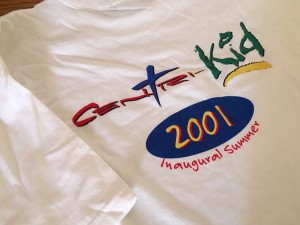 Here is a fun look at CentriKid Camps history. I realized that while the logos and the themes have changed, there have always been summer staff committed to sharing the Gospel with kids.

When CentriKid began, there was an huge need to connect the name of the camp to Centrifuge Camps, which was the camp we got our name from. In the original logo there was even a dash and a bunch of colors to demonstrate the kid-friendliness of this new camp. (By the way, we now format our name as “CentriKid.” NOT “Centri-Kid” or “Centrikid.”) 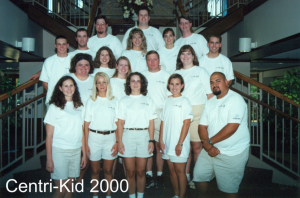 This is the inaugural team that piloted CentriKid at Linden Valley in 2000.  I only know a few of people in this picture. I remember that my friend Tim directed this first pilot week of CentriKid, but these guys are not celebrities, in fact CentriKid culture has never been one that is a “green room” culture, nor have we tried to create celebrities.

We’ve had some pretty awesome people through the years, but basically our staff are a bunch of ordinary college kids and young professionals who choose to give their summer to serve in kingdom work and promoting the Gospel. 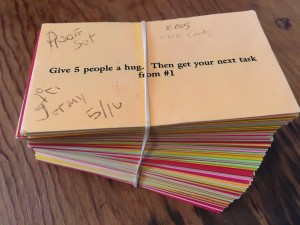 This picture is the very first stack of OMC cards that weren’t printed on computer paper and hand-cut during the summer at camp. OMC began as a grab bag adventure… And has evolved and improved every year to become the phenomenally fun game that you know at camp now! 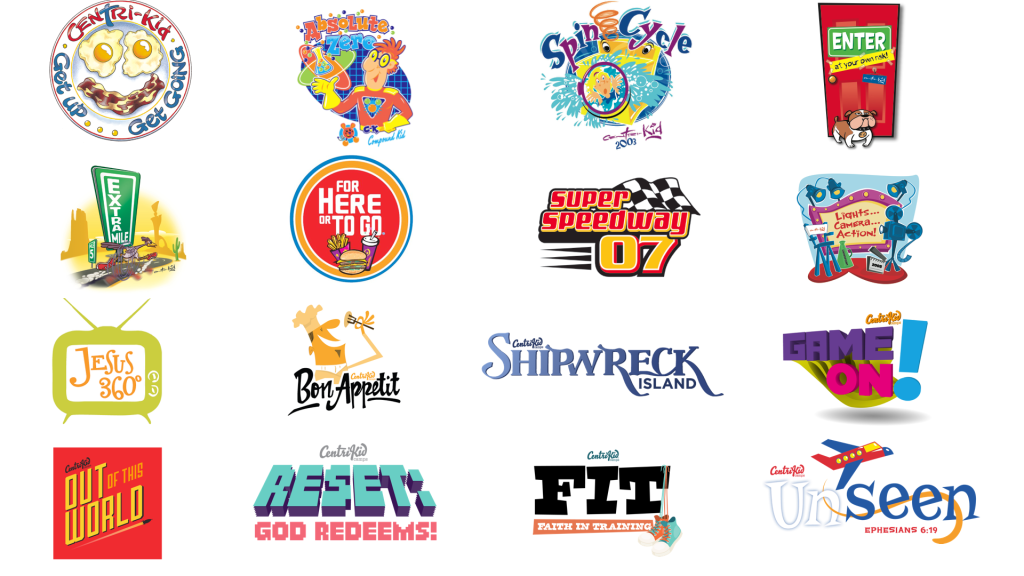 How many themes did you attend as a camper, staffer, or church leader?

The new school year has started and you are already taking your kids 100 different directions making it hard to remember the lessons that they learned this summer. How can you help your kids remember to be a disciple of Christ when they can’t even remember their lunch? I have been hugely blessed to grow up in a Christian home, so here are a few ways that my parents reminded me and my sisters how to be disciples of Christ. Try applying some of these to your family’s life as you grow in your faith.

1. A Disciple Encounters God Through His Word
My 8th grade sister’s favorite part of the day is lunch because she gets to talk to her friends and also see if mom packed her any surprises! At camp, we learned that a disciple encounters God through His word and that we are supposed to ingest it like food. Every once in a while slip a surprise snack into the lunch bag and write on a simple verse and note on a napkin that your child can read and be encouraged. On the ride home, talk to your child about how they used that verse during the day or how they were able to share it. Make this into a fun game and you will be surprised how fast your kids look forward to getting a Bible verse in their lunch box.

2. A Disciple Embraces God Through Prayer
Getting to school can sometimes be a hectic production of grabbing homework, packing lunches, and being sure all the kids are in the car. Once you are in the car, take time to say a prayer before dropping them off. The peace that comes from praying before you open the doors and start another crazy day will create a firm foundation for your kids. I still remember my dad praying for my oldest sister and I before we jumped out of the car for school and knowing that God was there with me no matter what happened that day.

3. A Disciple Engages with God Through Giving
As the kids go back to school, be sure that you are staying plugged into your church. We talked about how a disciple can give both their time and talents to Christ. Show your child that Christ is a priority in your life by being at church. You are the example that your kids will follow and when they see you giving your time to God, they will follow.

4. A Disciple Engages with God Through a Christian Community
Friends are a huge part of school and your children’s lives! Be intentional with those friends and their families. The friends your kids have will shape them and it is important that you invest in their friends.Creating a community of families that would hang out together has been a huge part of my walk with Christ. Having that group of Christian men that I could look up to and the support of so many people has encouraged me to grow as a disciple of Christ.

Parents, you are the number one example that your kids will be following. Starting school can be just as daunting a task for you as it is for them. Be sure to take some time to invest in your kids and their spiritual growth as you both grow as disciples of Christ.